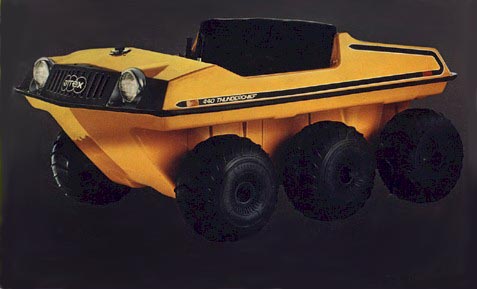 These Photo's were taken around 1980 at a race in Pennsylvania.

The Win Su was a all season  vehicle, offered by Attex during the Company's last years.

Here are some photos sent to me by Steve and Amanda Duckworth of an eight wheeled Attex. I'm told this is one which was being developed for the Military.

This info was sent to me by Fred K.

Hi Joe,
I wanted to tell you a little about the Attex 8x8. It was made specifically for the army, the state of Michigan had at least 10 that I have found out about, they were used to train tank drivers and used for practice, in the early 70's. The single forward seat was the trainee and then instructor and alt driver in back. I purchased mine from a fire department, they used it for rescue one a sledding hill, and parades. I had to totally rewire it, I used a regulator from a Kohler lawnmower engine, the engine is a JLO 400, it was based off from the Chief 400, with an extra set of wheels. Anyway, to answer your question about the torque, it will be the same as the JLO 400 and 440, if you have those torque specs. If you don't, I can email them to you, I just have to find my book...If you have any questions, feel freee to ask, you may find them in a snowmobile repair book, same engine. Have a good day...
Fred